In addition to our WBENC Certification we have the following memberships and accreditations:

The Abaco Corporation is a family based company that was developed by bringing together years of construction, facility maintenance, and management experience that were all shared. Starting out, our focus was in the Northeast and has continued to expand within the areas we are most comfortable with. Abaco has developed a large staff of experienced in-house service technicians, as well as aligned relationships with many licensed subcontractors throughout our areas which we consider one of our strengths. Coupled with our Leadership team and the in-house Customer Service Call Center we are consistently delivering quality prompt service to all our clients, 24 hours a day, seven days a week. We pride ourselves on delivering excellent and honest Customer Service daily.

Our Mission Statement:
“Abaco is committed to being the premier provider of facilities maintenance & construction services for our clients. Our success is driven by our passion for excellence, integrity and respect for our employees, customers, business partners and community.” 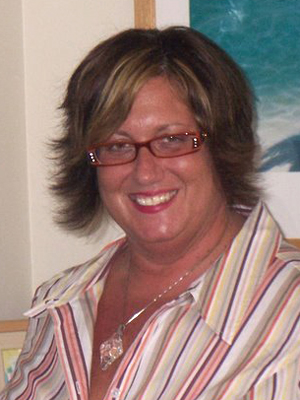 As sole owner & President of Abaco Corporation I am proud to run a successful and growing Retail Facilities Construction & Maintenance management company. My expertise is construction management which I have been doing for over 13 years. Abaco handles the maintenance in numerous retail chains and properties in the Northeast (such as Victoria’s Secret, Bath & Body Works, Express, CVS, etc…). I received my Bachelor of Science degree in Business Administration with a minor in Women’s Studies from The Rochester Institute of Technology in 1992. I have a Goal to receive my Master’s in Facilities Management from RIT within the next 5 or so years. (It’s not the same going back to college and running a business.) I am actively involved in PRSM (Professional Retail Store Maintenance Association) and am also a certified Women’s Business Enterprise National Council (WBENC) company. My hobbies and special interests include spending time husband & with my family which includes our 3 dogs, riding my Harley, traveling and reading. My favorite place to be no matter where in the world always revolves around a beach. The business was actually named after the Abaco Islands a wonderful area in The Bahamas where my parents brought us to as kids. The charities that I am most passionate about are The Food Bank of Monmouth & Ocean Counties, Second Harvest, The Barnegat Food Pantry, The Breast Cancer Association and The Barnegat Local Police Department. My office also takes part in numerous charitable events throughout the year as we truly believe in giving back to our Community. It is something I am very passionate about. Some of my finest personal achievements & pleasures arise when helping others.

Sean Gallagher has been Vice President of Abaco for over 8 years, helping in the reorganization and reinvention of this highly successful Retail Maintenance and Construction Corporation. He brings to Abaco his many years in both the Retail and Construction Industry. With a varied background which includes Assistant Technical Director of the Woodwork Institute of California, Vice President of Construction for The Transaction Financial Corporation, a California Real Estate Investment Firm and a Member of Management for the Home Depot Corporation working in various markets assisting in the Strategic and New Growth Initiatives. These years of expertise in these businesses have proved invaluable in the growth and organization of Abaco.

Hear what some of our clients have to say about us:

Manager of Facilities, National Retailer
“What sets Abaco apart from other companies is their ability to anticipate a clients needs, sometimes before even the client knows what those need are.  They are always the first contractor to go above and beyond with additional reporting, spreadsheets, and information.  Their internal office staff is incredibly knowledgeable and helpful.  There is never a need to ask for a specific person because there are always any number of people that can answer your questions.  Their work is always top quality and they partner with the client constantly to do what’s best for the stores.  If a project is presented to them that they are unable to complete successfully due to budget or time frames, they will partner with the client to do what’s best.  Abaco isn’t just a company, they are group of highly dedicated individuals who understand the challenges that face the client on a daily basis.”

“We have hired ABACO as a General Maintenance Contractor more than once, Top qualities:  Great Results, Expert, High Integrity ABACO is customer focused and looking to understand and continually provide value to clients at every level.  Through ABACO’s efforts, a very large maintenance program affecting a large number of stores was executed seamlessly – on time, on budget, and with very satisfied store managers!  ABACO has my highest recommendation.”

“We utilize Abaco for Construction Projects, Plumbing, Electrical, and Handyman Repairs for the majority of our stores on the East Coast.  Abaco additionally rose to the challenge of converting two of our key Manhattan stores to duel gender prior to the 2002 holiday season.  This entailed repainting the entire stores, refinishing the floors, installing new signs, and other miscellaneous renovation work.  These projects were completed in a record three weeks with no interruption to the business!”

Vice President Store Operations and Maintenance, Lbrands
“I have used ABACO for many projects and always find them to be very detailed, consistent and reliable in their work habits.  They actually worked so well on a current shelving project that we used them to train other vendors and provide quality assessment surveys on completed work.  They were very professional and constant with the value add they provided the project.”
Victoria’s Secret, Project Manager
“Amanda has grown a very successful business in the years I’ve worked with her and I would recommend the Abaco Corporation to anyone looking for quality worksmanship, a trustworthy team and consistent results time and time again.I began hiring Abaco and working with Amanda when I was a Facility Coordinator at Express.  As my experience and position grew within Lbrands, I continued to hire Abaco for larger and larger projects…always getting the results I expected.  Her pricing is fair and she has always met the strict deadlines of the Retail Industry.  Throughout my career, I will continue to work with Abaco and to promote their business.”

“We bring ORGANIZATION to a whole new level!”

Abaco has developed a successful team of Project Managers, Site Superintendents, Skilled Technicians, and Qualified subcontractors. With this team in place, Abaco has been able to deliver to our clients: fast, hassle free, high quality project completions at competitive rates. Abaco can assist in your construction projects as well as interact with operational employees from beginning to end.

The first inhabitants of the Abaco Islands were the Lucayan Indians, described by Columbus upon his discovery of the New World in 1492, as gentle and kind. Unfortunately, these indigenous people who had plied the beautiful Bahamian waters for hundreds if not thousands of years were enslaved by the Spanish for work in Hispaniola. By 1550, the entire culture was virtually exterminated by overwork and European diseases. Abaco was probably a transient home for wreckers, fishermen, and pirates from time to time, but no permanent settlement was established for 200 years.

The first permanent settlers of recent history were Loyalists from the Carolinas and Virginia who sympathized with the British during and after the American Revolution. It was from this strong stock that today’s oldest established families of Abaco descended. Over the next 200 years they turned to the sea and made a modest but sustainable living from sponging, crawfish, and boat building.

In the twentieth century some success has been made in various timber operations and in craw fishing, but today the mainstay of the economy is the visitor, the yachtsman, and the foreign homeowner. If your dream of a Caribbean vacation involves unspoiled, un-asphalted, un-crowded, un-casinoed and un-touristy islands, go to Abaco, Bahamas, and discover the undiscovered.

Located just 200 miles east of West Palm Beach, FL and 100 miles north of Nassau, Hope Town is a quaint village on the beautiful island of Elbow Cay. Elbow Cay is just one of many small cays in the boomerang-shaped barrier to the mainland of Abaco in the Bahamas. At around 4.5 miles long and 1080 yards (according to Google Earth) at its widest point, Elbow Cay is home to wonderful people, great food, beautiful beaches, breathtaking sunsets, and is in close proximity to world-class sailing, snorkeling, diving, and fishing.

Hope Town is still regarded as the most scenic and unspoiled destination in the Bahamas. Water is visible on both sides of the island — the blue ocean on one side, the green harbor on the other. The traffic throughout this quaint little town still consists of bare feet and bicycles; there is no motorized traffic in Hope Town. The easygoing nature of everyone on the island is infectious and relaxing – they definitely embrace the concept of “island time.” Its sparkling waters and pristine beaches are also home to the Bahamas famous red and white lighthouse. The Hope Town lighthouse is one of only three kerosene-powered lights in the world, and all three are in the Bahamas. The large Fresnel lens floating in a bath of mercury generates a light visible more than 17 miles.

Feel free to continue exploring Hope Town from afar…or plan a trip, it will be worth it.

P.S. This exact island was the inspiration for our company name. The owner spent several vacations in Hope Town with her family as a teenager and obviously never left it behind.
http://www.abacolife.com/